The Hound of the Baskervilles is the hugely popular story written by Sir Arthur Conan-Doyle of a savage, black beast that rapaciously haunts Dartmoor. It was serialised in the Strand Magazine between August 1901 and April 1902.

In the opening chapters of the book we learn about the death of Sir Charles Baskerville seemingly at the hands (or should I say paws) of a monstrous hell-hound.

As we now eagerly await the next episode of a favourite television drama or detective series, imagine the anticipation of Conan-Doyle’s readers as they waited for each monthly instalment.  From the start, the question on everyone’s lips was “Did the dog do it?” 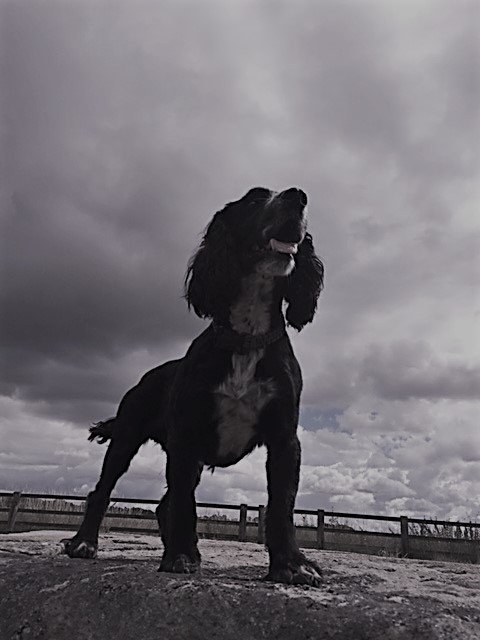 Now play the game inspired by the book…

Well, let’s look at the evidence:

The Hound is described by Dr Watson as “not a pure bloodhound and it was not a pure mastiff but it appeared to be a combination of the two.”

Blood hounds or ‘slough dogs’ as they were known in Scotland can detect human scent over huge distances, and it is from ‘slough dog’ that the word ‘sleuth’ comes.  However they are not generally an aggressive breed so Conan-Doyle knew that he needed something a little scarier if he was to convince his readers. Like Frankenstein, he needed to create a monster.

The mastiff certainly fitted the image of ‘bad-ass dog’ in the early 1900s. With a huge body and broad skull, the mastiff, descended from the molossus, a fighting dog used by the Greeks and the Romans, was popularly described, sometimes undeservedly, as ‘ferocious’.

In fact a certain ferocity was encouraged by some owners, and their size made them the obvious choice as guard dogs. In The Adventures of the Copper Beeches, another Sherlock Holmes mystery, published ten years earlier, a giant mastiff, Carlo, is deliberately kept hungry and let out to prowl the grounds at night. When Mr Rucastle, the owner of the house, is attacked by the dog, Dr Watson shoots it dead with a revolver.  Conan-Doyle had already established the idea of the dangerous dog in this earlier story. His readers knew the power of the sinister mutt!

This type of story would have been familiar to the reading public as newspapers were littered with them. In The Standard, Feb 12th 1898, it was reported that Alfred Ladd was bitten playing quoits at the Great Western Tavern by “A ferocious dog, which had a most unenviable reputation, and during its career it had bitten and attacked scores of people. The dog was kept as a “sort of “chucker out”. Whenever there was an unruly customer in the house who refused to be quiet or go out when asked, the defendant brought in the dog, which very soon turned the person out.” The owner had warned Ladd “of the ferocity of the dog, and told him that if it got hold of him it would pull half his leg off.”

Indeed despite the British newspaper magnate Alfred Harmsworth’s assertion that “When a dog bites a man, that is not news, because it happens so often. But if a man bites a dog, that is news,” the newspapers of the time seemed happy to print these colourful and lurid stories of dangerous dogs, fuelling the popular imagination that big, black dog equals bad thing.

In Cockermouth an elderly woman was attacked by a large mastiff, which “flew at her throat and seized her. The woman’s arms were torn and bitten in the struggle and her clothes reduced to rags. She managed to escape from the house on her hands and knees, and when assistance came she fainted.” (The Weekly Standard and Express, 23rd February 1895)

Similarly Edith Archer, aged 13, of Huddersfield, was bitten by a dog, which “rushed out and seized the girl by the right leg, biting the skin through to the shin bone. Blood flowed and the girl’s stocking became practically saturated with it.” (Huddersfield Chronicle 18th March 1898)

It is not impossible to believe dogs are dangerous, for we know in certain cases it is true and in a pre-burglar alarm era, a certain aggression would have been prized, but spectral, luminous dogs charging across boggy mires seems a stretch of the imagination? What was Conan-Doyle thinking?

Tales of spectral black dogs were common in country folk lore and a belief that animal “familiars” – usually black cats or dogs carried out the work of the Devil had been prevalent for many centuries but it was while visiting Bertram Fletcher Robinson, the sportsman, journalist and author, that Conan-Doyle became aware of the legend of Richard Cabell, an evil country squire and the phantom hounds that appeared baying on the moor after his death. It is believed that this story was the inspiration for the novel.

Other possible inspirations are the supernatural dog of Devon folklore called the Yeth and the legend of the hound of Clyro Court, owned by Thomas Mynors Baskerville.

However Conan-Doyle wasn’t the first writer to use fierce dogs in fiction. Malba, a magnificent mastiff “sprang like a panther on the red-haired wretch and fixing him by the throat, bore him to the ground” in the “Strange stories of dogs” published in the Up-to-date Boys journal and novelettes, 4th May 1900. Indeed the mastiff was already stereo-typed as the bad-boy of the dog world.

So, the question you are probably asking is, did the dog do it?  Ah, well, that would be telling.  You have to read the book to find out and if you want to live the experience, play the Hound of the Biskervilles murder mystery game.  However expect a twist. You didn’t think I’d really keep the same ending, did you?